CAN the TRUTH COME out of CHILDREN’S MOUTH? 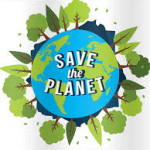 different periods but with the same ambition: save the planet from climate change because if we don’t, our planet will die.
They both try to raise awareness towards the environment with their speeches and strikes. 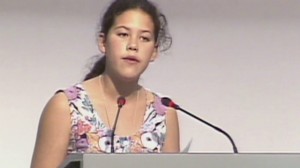 Severn Cullis-Suzuki is a Canadian environmental activist, speaker, television host and author. In 1992, at only 12 years old, she spoke in front of the UN Earth Summit in Rio de Janeiro about the holes in the ozone layer which is still threatening the environment greatly.

Unlike Suzuki, when Greta speaks in public, her words seem to be more powerful because of her Asperger syndrome, which leads her to speak her mind without any filters. Another big difference between the two girls, is that in 1992 when Suzuki was a child there were no social networks which greatly help Thundberg in getting her message heard all around the world.

On August 20th 2018 Greta Thunberg, who was attending the ninth year of a school in

Stockholm, decided not to go to school until the legislative elections of September 9th 2018. The decision for this gesture came about due to the exceptional heat waves and unprecedented forest fires that hit her country during that summer. She wanted the Swedish government to reduce carbon dioxide emissions as foreseen by the Paris agreement on climate change and remained sitting in front of her country’s parliament every day during school hours. Her slogan is Skolstrejkförklimatet (Climate school strike).

Both girls are now working together for the environment’s sake.